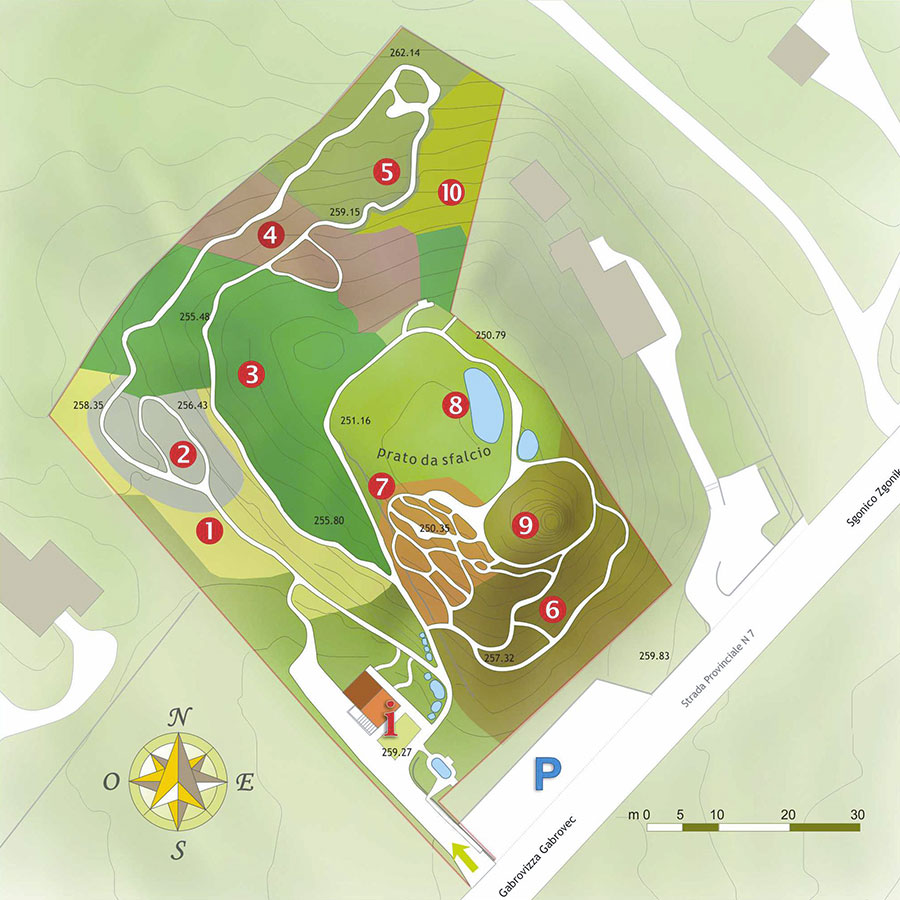 Carsiana, the Botanical Garden of the Karst

The Carsiana Botanical Garden is located in the Municipality of Sgonico, 18 km from Trieste, along the provincial road that connects the village of Sgonico to that of Gabrovizza.

Carsiana was created in 1964 through a desire of the founders, Dr. Gianfranco Gioitti, Dr. Stanislao Budin and Prof. Livio Poldini. Dr. Gianfranco Gioitti purchased and provided the land, oversaw the preparation of the botanical garden for over 40 years and was Horti Praefectus. Dr. Fabrizio Martini and Mr. Eliseo Osualdini also contributed to its development and its floristic enrichment, initially making use of the help of Mr. Giovanni Kocman of Sgonico. The garden was conceived with the aim of collecting, conserving and illustrating the spontaneous flora and vegetation of the Karst, but set in a natural context. The garden contains the native plant species of the Karst, located in their respective environments, which are laid out along the slopes of the doline that characterizes it.
In 2002 the Garden was purchased by the Province of Trieste and from 1st July 2016 it was transferred to the Autonomous Region of Friuli Venezia Giulia.

Maintenance activities, those connected to the use, interpretation and promotion of the Garden are assigned to an external service and since 19th December 2018 the management of Carsiana has in fact been entrusted to the Rogos Cooperative.

The Classical Karst (Matični Kras in Slovenian) is a plateau of carbonate rocks running in a north-west south-east direction and covering an area of almost 700 square kilometres, divided between Slovenia and Italy. To the north-west the boundary is the flood-plain of the Isonzo (Soča) river with the reliefs of Redipuglia as its westernmost point as far as the Timavo springs while to south-west to the south-east the limit is naturally represented by the north-eastern Adriatic coast of the Gulf of Trieste and the lithological contact with the Flysch (sandstones and marls) in the south-west, continuing in the same direction, up as far as the Val Rosandra (Glinščica). From here towards the northeast, the perimeter is less clear, passing around Mount Carso (Griža / Mali Kras) up to and beyond the area of the Škocjan Caves, where the Reka River (the upper Timavo) disappears below the limestone, omitting (to the southeast) its flyschoid basin, while; to the north the boundary runs from the southern slopes of Mount Vremščica (Auremiano) continuing in a north-westerly direction towards the Raša torrent, the Branica river and the contact between the Flysch of the Vipava Valley (Vipacco) and the cabonatic rocks until they meet again at the confluence of the Vipacco and Isonzo rivers. 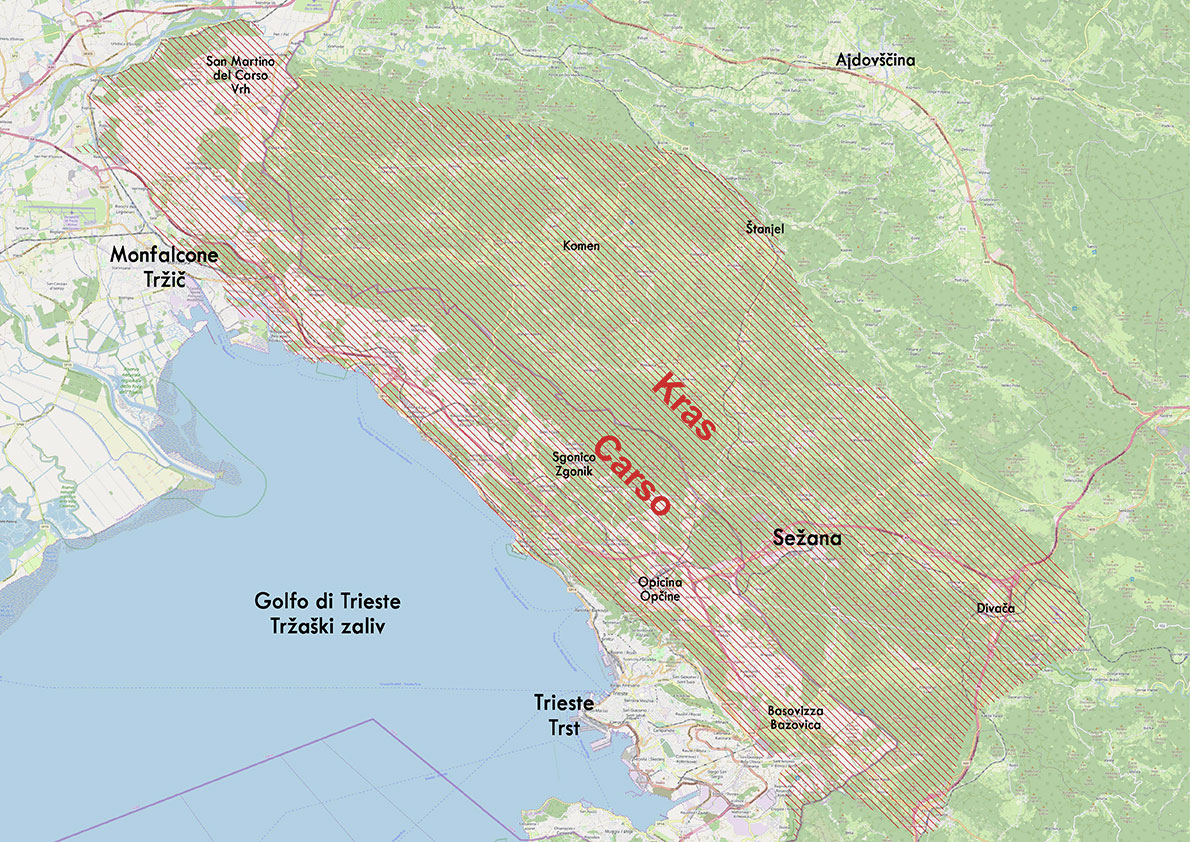 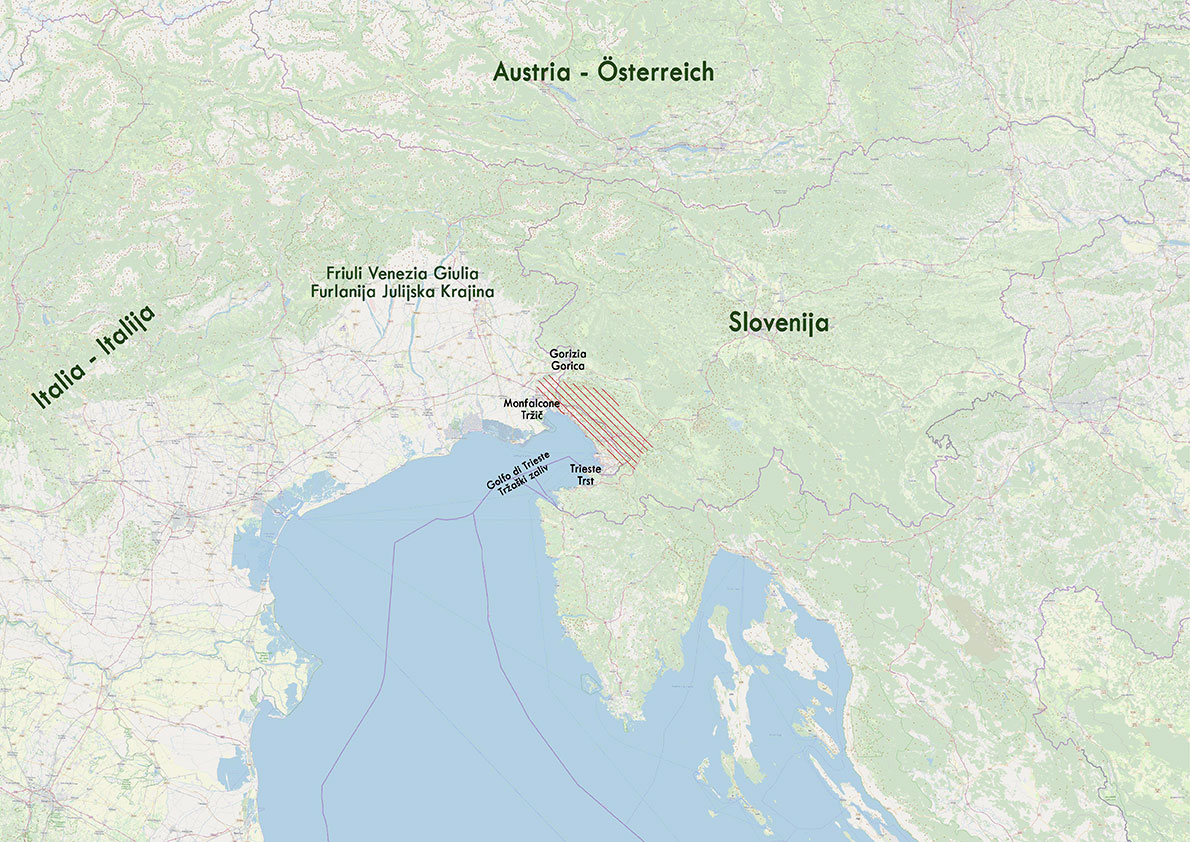 The calcareous substrates are very permeable resulting in a widepread aridity that can be locally exacerbated by the heat-reflecting action of bare rocks. The high permeability of this substrate is due to the fracturing of the calcareous rocks which encourage the infiltration of the water network that is now totally hypogeal, leading to a hydrography that develops at a depth of 200-500 m (Poldini, 1972). The hypogean Karst also manifests itself with caves that generally follow the position of the layers and with pot-holes that are formed in correspondence to subvertical fractures.

The karst lakes of Doberdò and Pietrarossa and the Rosandra torrent are almost the only example of surface waters.

There are about 600 floristic species gathered in the 5000 square metres dedicated to the botanical gardens. The area was chosen because, in this small piece of land, are found all the main geomorphological conformations of the Karst with their respective associated plant formations naturally present. The natural conformation of the garden has allowed the structuring of the botanical displays following an interpretation of their ecological characteristics and not according to systematic rules, thus allowing a more intuitive understanding of the link between the Karst’s vegetation, climate and geology. Carsiana therefore seeks to be a “synthesis of the Karst landscape” that provides the visitor with an exhaustive picture of the main ecological aspects of the area.

The displays are completed by some flower beds dedicated to the spontaneous medicinal plants of the Karst.