The logo of the Carsiana Botanical Garden

In the early 1980s, the Province of Trieste commissioned athe rchitect Giorgio Schumann to create a logo for Carsiana, to be used for road signs. The first proposal was a stylized cyclamen, which however did not meet with the favour of the technical scientific committee led by Dr. Gioitti. Schumann then went on to create a stylized daisy, also used in later years for advertising banners.

In the Garden brochures and on the entrance tickets, created in several versions over the years, images of various plants have been used including Mediterranean Spurge (Euphorbia characias), Amethyst Eryngo (Eryngium amethystinum), Orange Lily (Lilium bulbiferum) and other plants of the Karst flora including the Wild Peony (Paeonia officinalis s. l.) which stands out in particular and was often used and not only for its striking beauty. In the 1980s the collection of elements of the spontaneous flora was, in fact, still a widespread and often uncontrolled practice that threatened the conservation of the most striking species including that of the peony itself. The garden has undoubtedly successfully contributed to the spread of knowledge and sensitivity to the protection of Nature in several generations of visitors.

In 2019 the Region Friuli Venezia Giulia, in the context of an overall redevelopment and promotion of the Garden, sought to provide the it with a logo consistent with the Regional system of the coordinated image of the various protected areas.

The choice of the emblem of the Garden was long thought about.

The first hypothesis evaluated was the Wild Peony, but was abandoned for two reasons: first of all, the plant, which has spectacular blooms and is a species protected by Regional regulations, is typical of a woodland environment and is therefore linked to the expansion of the Karst scrub resulting from the abandonment of traditional agro-pastoral practices, an expansion that today represents a critical issue for the conservation of local biodiversity. Furthermore, in recent years the Paeonia genus has seen a profound taxonomic revision which has also affected the Wild Peonies of the Karst. The works of Podini & Oriolo 2002, Passalacqua & Bernardo 2004, Pignatti 2017-2018-2019 all examine the issue. In light of this and the difficulty in determining the peonies belonging to the officinalis group that sees a range of positions even among the most famous experts in the field and the fact that the selfsame collection of peonies present at Carsiana shows high morphological variability, it is not possible, at present, to be certain of their classification. In light of these considerations, it was decided to focus definitively on species that are well-known from a taxonomic perspective and that characterize aspects of the Karst vegetation.

The revival of the identity of the Garden goes hand in hand with the relaunch of its mission and its cultural role, precisely because (as written in 1980 by the authors Poldini, Gioitti, Martini and Budin in the book “Introduzione alla flora e alla vegetazione del Carso” ("An introduction to the flora and vegetation of the Karst”), “Carsiana is an environmental education tool that, by influencing the conscience of the population, can contribute to a correct use of the local environment and its resources”. With this direction indicated by the founders, a logo was therefore sought to identify the most threatened and precious element of the Karst today: the landa carsica. These dry grasslands have always been perceived as not very productive and therefore of little value, but in reality they constitute an enormous patrimony of biodiversity, protected by Regional, national and European Union legislation and of which the whole community should feel themselves the guardians. Certain Illyrian endemic species related to this environment were thus considered, such as the Spring Gentian (Gentiana verna) of the subspecies tergestina or the Wood Pink (Dianthus sylvestris) of the subspecies tergestinus but these did not lend themselves to being satisfactorily rendered in graphic terms.

The words of the writer Scipio Slataper: “My Karst is hard and good. Each of its blades of grass has split the rock to sprout, each of its flowers has drunk of the heat to unfold.” echoed in the minds of the Working Group. Thus a flower was sought that represented the perseverance and tenacity of life that emerges from the rock and after careful consideration, the choice thus fell on Rock Knapweed (Centaurea rupestris), a humble and inconspicuous flower, disheveled by the Bora wind and yellow like the summer sun.
It is perhaps not the most “beautiful” flower in the Garden, but it is certainly the most representative of the conservation and protection objectives of this area. Centaurea rupestris is in fact a characteristic species of the vegetational association (which it takes its name from) the Carici-Centaureetum rupestris, a plant community better known as “landa carsica”.
Today Centaurea rupestris also represents the Region's commitment to protecting the most sensitive and unsusual environments of the Karst and to continue, in the footsteps of the founders of the Garden, in the work of raising awareness and education. This is the hope and commitment of the entire Carsiana staff. 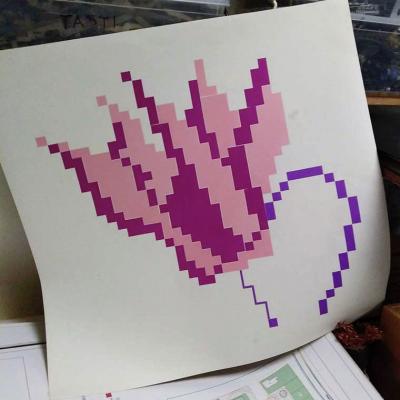 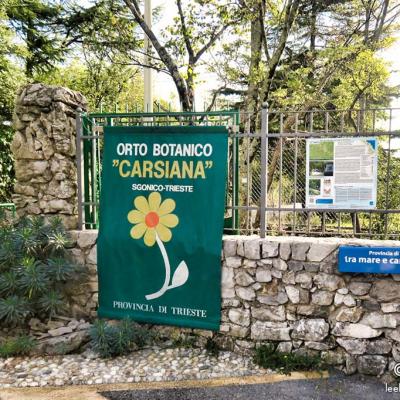 Poster with the Daisy logo 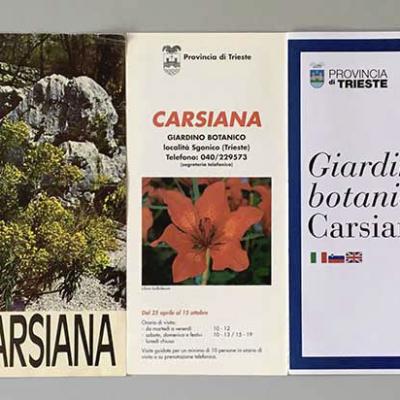 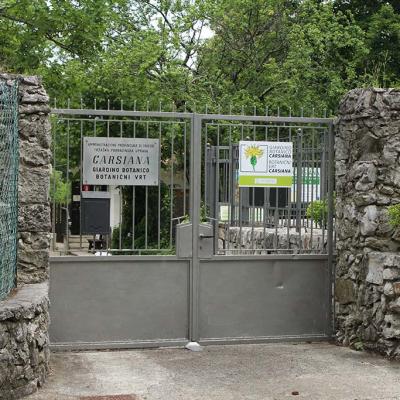 Entrance to the Carsiana Botanical Garden